The painter dives in on his experience as a black man from DC influenced by art and fashion in his new Brooklyn Museum exhibition.

Artist Eric N. Mack considers himself a painter, but not in the conventional sense. Mack usually forgoes the typical mediums like oil paints for fabric dye, and substitutes fabric for canvases. Mack makes immersive installations consisting of sculptures, paintings, and collages where he wants the viewers to think “about painting in a way that challenges tradition.”

Lemme walk across the room, the title of Mack’s current exhibition at The Brooklyn Museum, which is on view until July 7, explains it. The artist filled the museum’s Great Hall with a mixture of colorful dyed fabric, pages from old magazines, and even a ladder taken from Robert Rauschenberg’s gulf-side estate in Captiva, Florida. Lemme walk across the room is Mack’s exploration of identity and the body that draws connections between his painting, art, pop culture, and fashion.

Mack, who is a graduate of Cooper Union and Yale’s MFA program, got his footing in the art world at a young age, thanks to both of his parents working at the National Gallery in DC. He has fond memories of going there, and other museums in the area like the Hirshhorn. He has early memories of seeing an Ana Mendieta show at the Hirshhorn, and a David Hammons exhibition, as well as works by artists like Morris Louis, Mark Rothko, and Sam Gilliam. “When I went to college, there was kind of opportunities to take those things and really continue to examine my take on it,” Mack recalled.

Mack grew up in the what he calls the “urban suburbs” of DC, where he went to a prestigious predominantly black arts high school in Capitol Heights, an area bordering the American capital that he refers to as “Chocolate City.” “There were kids driving to school in BMWs, and then there were kids walking to school, stealing,” Mack recalled. “My parents always instilled in me that I could do whatever I wanted if I worked hard, and so there’s a lot of goals that, more recently, have been able to see come to fruition.” His father owned a clothing store on the border of Maryland and DC that eventually became a roving pop-up shop that carried many of the cool brands of the ‘90s, like FUBU, Coogi, Phat Farm, Sean John, and NorthFace. Mack would be treated to clothing from time to time as a treat for making the honor roll.

Upon entering the Great Hall, visitors can choose the way in which they navigate the space. Each exhibit within the show is a part of an assemblage that culls together experiences and observations from Mack’s life. There’s a long roll of fabric that Mack painted stripes of various colors on with dye that stretches around one side of the room. In another section, shirts made from a bolt of yellow cloth that Mack painted on in red hang in a row. On one wall is a group of abstract works on paper made from “outtakes” that he used to make the lines in his fabric painting process from the roll of fabric. In another corner, Mack hung a patchwork of fabric strewn together that he bought while in Milan for a residency. “The colorways, I see this is kind of Prada neon green,” said Mack as he pointed to a piece of fabric. 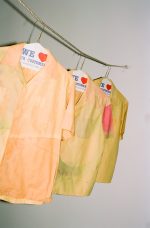 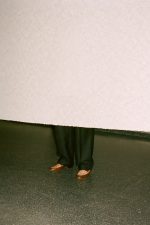 Pages of magazines and newspapers that Mack collected from his different life experiences cover that section. There are pages that show a young Janet Jackson and Courtney Love torn from an issue of Interview magazine from 1987, the year he was born; pages from an African diaspora newspaper he found in Harlem; a large 2001 Fader cover featuring Kelis that Mack was drawn to because of the way the clothes fit on her body; pages of works by Iza Genzken and Wolfgang Tillmans; old Céline ads; a page with photos from the ‘60s of French film icons Brigitte Bardot and Catherine Deneuve; an Andreas Gursky cover of Artforum high above a Proenza Schouler runway photo featuring a similar image by the artist on a dress; newspapers from Captiva, and a tiny photo of Mack at age 14. Several of the pages were collected when he worked at the New York bookstore McNally Jackson. “This is like a mood board almost, like thinking that something would come from [it], again, the kind of potential, but mood boards are about creating meaning in a way, creating constructive relationships that make sense,” said Mack.

Blurred pieces of works by Rauschenberg that Mack saw growing up are etched in his head. In particular, a collage by Rauschenberg featuring a Japanese fish kite became embedded in Mack’s memory. Mack would have the opportunity to work in Rauschenberg’s Captiva studios through a residency at the Robert Rauschenberg Foundation in 2017, when he spent six weeks creating at the sprawling picturesque piece of paradise. One of the focal points of the exhibition is a sculpture that is an homage to Rauschenberg, made from a ladder from the estate that Mack traded for a new one, as well as fishnet and bits of garments from Captiva. “It was kind of transformative to be able to work in his space and to think about Bob,” said Mack of the experience.

In the exhibition we see Mack’s own personal narrative, an amalgam of memories, influences, and his own personal self-expression. After all, Mack wants viewers to realize through it “how important it is to find your own answers, and the things that resonate to you, the things that are fundamental to you need to be respected and challenged.” 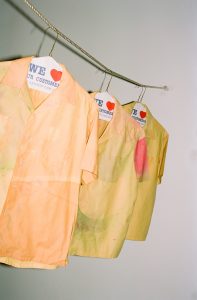 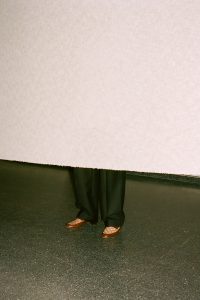 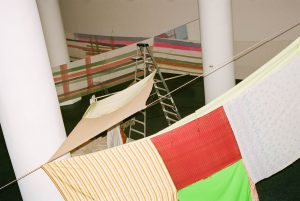