Sculptor Andrés Laracuente presents his newest show at 83 Pitt Street, and sits down with Matthew Lyons, curator of New York’s seminal alternative space The Kitchen, for Document to discuss materials, energy, and systems.

Matthew—So let’s get things started. I want to start by asking you about your connection to material. To matter. These new pieces contain dried apple cores or blades of grass but also plastic sheeting and tubing, dry dog food, and chain mail, among others. Was some connection to these elements as material the starting point for any of these works?

Andrés—Yes, it’s often a bit difficult for me to determine a starting point for an artwork, but material was very important and was right there alongside other “starting” factors, for instance, like a complex feeling I wanted to express, or a certain social condition I wanted to engage. You mention matter, and we generally understand matter as something separate from energy, it is mass at rest, physical and corporeal, distinct from mind and spirit. In these works, I ended up thinking a lot about the edges of things. Although the works are very specific in matter, there is a sense of energy suspended contained, segmented, and measured. So in speaking in terms of matter, energy is equally present and important. I think all the plastic in these works does a pretty good job of blurring the edges of the material, while also creating a sense of self contained energy, or packs. I think that much or the material you mentioned has a familiar face for us today. I was drawn to materials that performed in a certain way, that also reflected certain industrial, commercial dimensions. In most cases I worked from “raw” material and fabricated these things that look like something from manufacturing, or service and food industries, but the resultant artwork confounds those known measures.

Matthew—Can you talk more about systems? I was seeing energy and potential in suspended circulation.

Andrés—Yes you are right about what you were seeing, I feel that way. They are all like segments of systems in that they are like relatively thin slices of atmosphere. The box fan artwork in particular is very much like a closed system. It is circulating some unknown air, the system has no beginning and no end. Typically, a box fan sort of sucks the air from the surrounding atmosphere, accelerates its motion, and the spits it out on the other end so there is this linear beginning and end or source and output. But this work seriously complicates that work flow. On one side, usually understood as the “front” of the fan there is a hole. One might expect some kind of vacuum pull from this hole or a blast of concentrated air, but when you put your hand up to it you don’t feel anything. This heightened moment of expression is rendered null. I am speaking of the box fan in a kind of formal way but of course all the language I’m using is analogous to human systems and systems of life in general. I am understanding and imagining life systems in this way.

Matthew—The fan also is visibly connected to a power source. Yet it forms a cul-de-sac from the power grid, something set apart from productivity or forward momentum.

Andrés—Yes, and because it is actually turned on, it produces the familiar white noise of a box fan. Although the sound is different because of the sealed state of this fan, it’s lower in tone and I think the resultant feeling is a little more ominous. The quick emotional registry of the fan work feels a bit like anxiety and constriction or possibly suffocation. Speaking of feelings, there is a sadness that is present throughout the works. A friend pointed out to me that there is a link between the wind that can’t blow in the fan work, and the grass that can’t sway in the wind in the work that contains hay. The dried grass is forced into graphic upright straight lines, suspended between plastic. This hay has potential too, which I think of as calories for consumption by farm animals. Of course, those calories are energy. I guess these dark feelings come into play any time energy is suspended or taken out of its flow. Like the way that money is accumulated and horded.

Speaking of the work with hay as well as others, there is a shift into this other kind of life, a 2D life, which I am interested in. 2D life is a term that refers to a universe created by anime, manga, video games, VR, as well as the merchandise that accompanies these industries. Although animation and video games are not strictly 2D, the expression is meant to emphasize the unreal qualities or the fantasy of the representations generated by these medias. The conception of 2D life embraces that fantasy, as having a kind of life of its own, it’s a distinct category that is loved. So this real physical material of hay (which has its own energy/potential) is pushed closer to a graphic or 2D representation. It’s amazing how plastic can consistently have this effect of creating distinct space, a space that comes off as ideal. It is literally a biological barrier, that can create sterile space and hermetic seals. And I think there is a fantasy in the idea of a distinct or pure separate space. I’m very interested in this space. 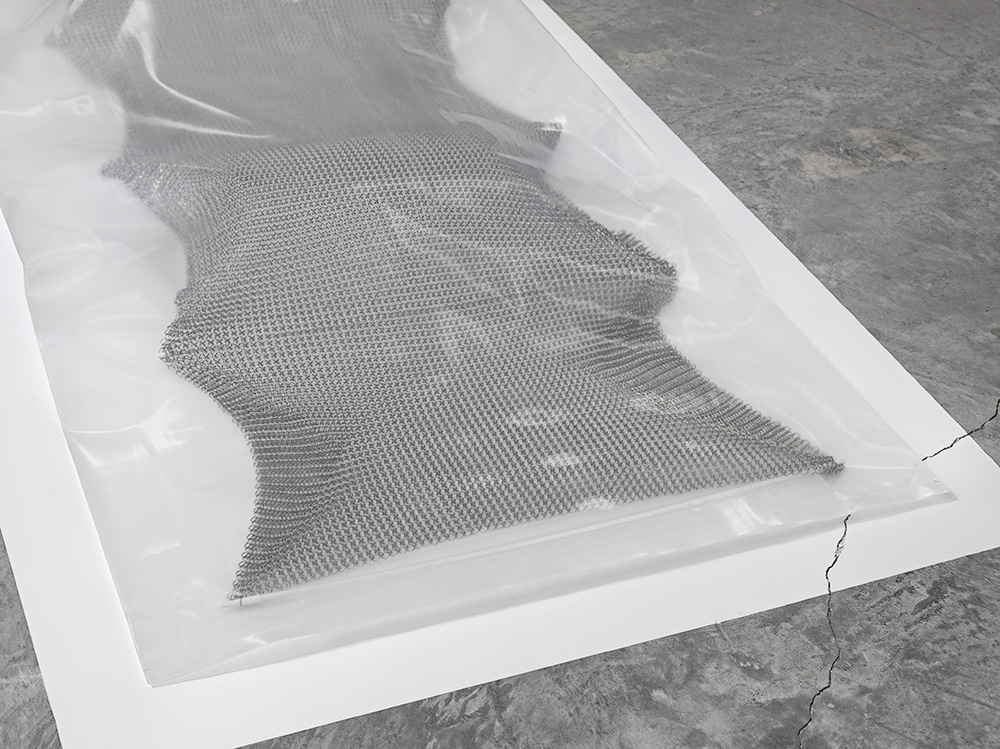 I think some important concepts are becoming more mainstream, like the understanding that Earth’s systems (like climate and environment) have become so completely affected by human activity that nature can no longer be understood as separate from humans. The evidence leads to the suggestion by many scientists that we name this new geological epoch the Anthropocene. This is an epoch that began with the industrial revolution. The idea is that the literal earth is formed by humans.

Andrés—Do you mean like the evidence bag at the crime scene, or as a part of some forensics? Sure, it feels like the material is there as a fact. Here it is. The plastic does this maybe, makes it feel empirical? The material may be a fact, but the artwork is something that is worked over. These self contained artworks, in the end, are things that are highly crafted and manipulated. This is true of all the works, especially in the chainmaille piece. For example, there is a lot of tricky manipulation that happens in the making of the piece to get the chainmaille to take (and keep) form. That work, literally folds up when it’s being moved. As does the hay artwork on the wall. In fact all of the works in this exhibition are incredibly light and especially mobile.

Matthew—The lightness and mobility comes through, as well as your connection to the organic matter or the finely-wrought chainmaille. I had also wondered about how some of these pieces might age or break down. I guess what I have been wanting to ask you, as a maker, knowing that you develop much of this work outside of the city, in a rural environment, is how you see this relationship between natural forces or matter and other kinds of human-made, contemporary systems?

Andrés—I made sure that the organic material is well preserved, and attempted to retard some of the operations of decomposition in those materials. It’s like they are in long term storage. They are suspended but their qualities have changed. In addition to being dehydrated the apples are treated with chitosan, which is a byproduct of the fishing industry. It comes from crab shells which have a natural quality that inhibits mold.

I think some important concepts are becoming more mainstream, like the understanding that Earth’s systems (like climate and environment) have become so completely affected by human activity that nature can no longer be understood as separate from humans. The evidence leads to the suggestion by many scientists that we name this new geological epoch the Anthropocene. This is an epoch that began with the industrial revolution. The idea is that the literal earth is formed by humans.

Of course this doesn’t mean that humans are in control of the Earth’s systems. To me it’s more like our industrial/financial/political activities are inseparable from Earth’s systems, like they have been absorbed by the planet. We know that this new condition is going to lead to great suffering for many people as well as a lot of unknown conditions and variables, not to mention the huge loss to biodiversity.

So for me there has always been a real blur at the edges of things, a difficulty in distinguishing categories. But I am also a real pragmatist at times and I know that there are very real qualities of difference in things. I understand the rural environment in which I work to be very NYC centric. Historically it has been a place where New Yorkers go to vacation, have retirement homes, ect. Before the invention of refrigeration, ice would be shipped from the Catskills for New Yorkers’ cocktails. The Hudson River School distinguished itself from a European history of painting in the Catskills. The landscape painters were coming from New York City. However, the rural environment in which I made these artworks is obviously a different situation, with systems at work that are different from those in NYC.

The apples I dehydrated and used in my artwork came from our own “organic” natural trees, which produce without our influence. But the hay I used was purchased from Home Depot, where it was commercially dried to inhibit mold, a marketable feature. But the apples could have come from Key Foods, and the hay from dried grass I collected in the wild fields. It’s like sameness and difference are operating simultaneously.

83 Pitt Street Exibition is on view by appointment through December 18th, 2015, in New York. For more information, visit AJLWork.com.