One half of Documenta 14, the most important art event in the world right now, just opened in Athens: A landmark moment for the 62-year-old mega exhibition that takes place once every five years; this is the first time it is held outside of Kassel, its home city in Germany. Superstar curator Adam Szymczyk, who is Polish born, leads a team in hosting the first wave of the quinquennial situated at a major site where the European debt crisis preceded the global rise of populism. He presents “Learning from Athens” as a working title, which speaks to the political radicality of learning, including native forms of knowledge: The big question emerges, “Can art change the world?” Many different answers unfold in the exhibition, each seemingly conflicting: Art cannot stop the world from being in crisis; it cannot halt humanitarian mass atrocities or will not eradicate disease, but it can change how we see the world, establish our histories, and approach our collective future.

The event, largely funded by the German parliament, has battled accusations of using its economic power to exploit Greece’s financial depression through exoticism, eliciting acts of colonization and poverty tourism. Documenta defends the pairing of Northern and Southern Europe as a collaboration with a common concern: How is art and its institutions made public and part of the common good? Szymczyk summoned the late Susan Sontag, insisting that we be “against interpretation.” Many of the works existed outside of the “normal” boundaries of contemporary art, casting a much wider net that gives idiosyncratic work a chance to shine. Instead of coming to the work with preconceptions, we must unlearn, which, ironically, “is the key to learning” said Szymczyk.

Entirely, Documenta 14 includes the work of 160 artists—those that are mostly obscured from the traditional art cannon. Nearly one-third of the enlisted talents are already deceased. Curator Candice Hopkins is a specialist in native art, and included much work typically considered ethnographic crafts of indigenous peoples such as the brilliant and powerful room of Beau Dick’s masks: This move further collapses the boundaries between art and life. 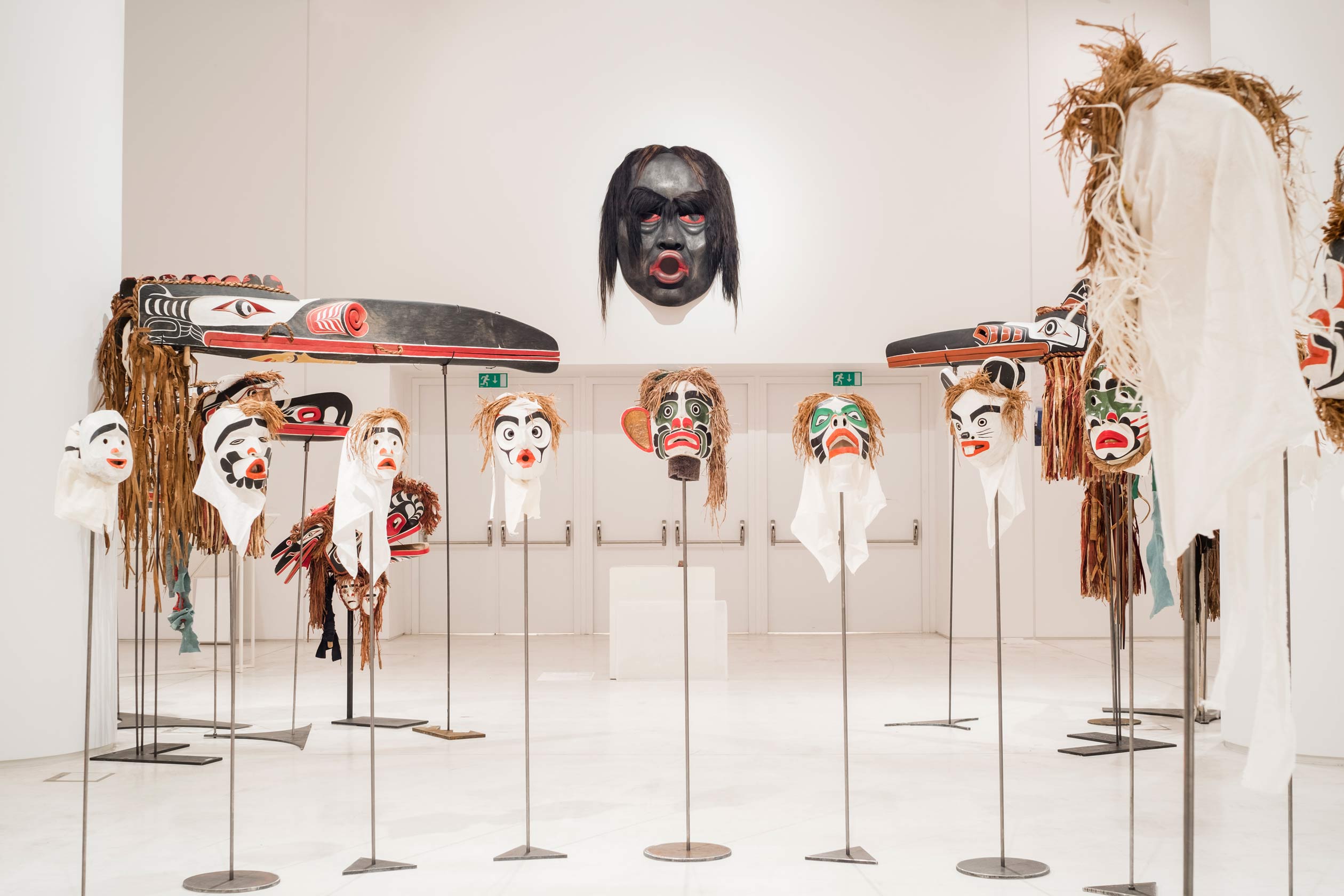 Greek composer Jani Christou’s “Epicycle” acts as a central experimental framework of the whole exhibition. In Christou’s work the human voice joins the music as anyone is invited to be apart of the work. The curators want to give equal weight to spoken word, or written text as images, still or moving, or objects. There is also a paradigm shift of artists acting as collectors: Works that take the form of collections include Olu Oguibe’s archival materials in vitrines in “Biafra Time Capsule”, “Pavel Brăila’s bottled on snow in a freezer in The Golden Snow of the Sochi Olympics”, and Véréna Paravel and Lucien Castaing-Taylor’s video “Somniloquies,” a prolific series of recorded sleep-talking.

The four main sites are the newly finished long-awaited National Museum of Contemporary Art, Athens (EMST), Athens Conservatoire of Music, the Benaki museums, and Athens School of Fine Arts. Szymczyk insisted that the exhibition should be approached as a geographic exploration since the 41 satellite sites were given just as much attention as the main sites. This forces us to slow down as there is no easy way to consume the show.

Athen’s long history in experimental music gives the genre prominence to modes such as improvisation, repetition, and interactivity. The entire exhibition emphasizes the ephemeral and the dematerialization of the art object. The Conservatorie is extremely carefully or even delicately curated avoiding to create spectacle at all cost: Much of the artwork shares an unbearable lightness of being. A necessary inclusion is the recently deceased electronic music heroine Pauline Oliveros, who is given an entire room (also a collection) of filled vitrines of witty, ironic, humorous score, notes, letters, and writings. Two artists make instruments out of found objects: Mexican composer Guillermo Galindo uses refuge found in refugee camps, which feels forced and falls short, where Nevin Aladağ creates instruments out mid century modern furniture with subtle interventions. Susan Hiller’s video installation, “The Last Silent Movie,” is one of the best works in the entire exhibition consisting of another collection—the audible sounds translated on an all black screen of spoken stories, jokes, and anecdotes in endangered or extinct languages—view the work more closely and come to see that languages are disappearing: one languages goes extinct every two week. Beatriz Gonzalez’s “Decoración de Interiores,” is a work of high Pop art, brilliantly creating a pattern out of an appropriated image of President Julio Cesar Turbay Ayala, too, a bloody dictator. One of the most epic works in all of Documenta 14 Athens is Emeka Ogboh’s multimedia sound installation, “The Way Earthly Things Are Going.” Bringing together two composers, whose compositions for the two languages come together in a haunting moving chorus—one Igbo and the other Greek—each voice is given its own speaker as if the human bodies are in the room with you.

There is a moment of striking visual beauty at the EMST museum with Nairy Baghramian’s “Drawing Table (Homage to Jane Bowles),” poetically based on Bowles’ book of the same title. Vija Celmins shows gems of early works, including a black and white painting that is part sumani, part burning forest. Stanley Whitney also presents his iconic abstract grid paintings in vibrating saturated colors. Moyra Davey gives us a very personal diarist video and a series of tender gelatin silver print, “Portrait/Landscape,” juxtaposes the two genres of classical photographical with images including her 20-something-year-old son and his friends often paired with their dogs. The photos are carefully folded into envelope shapes with colored neon pink, purple, gold tape which turns them into mail art. When Documenta received them, they were opened,hung on the walls, and the delicate folds only accentuated the reverence of the image. 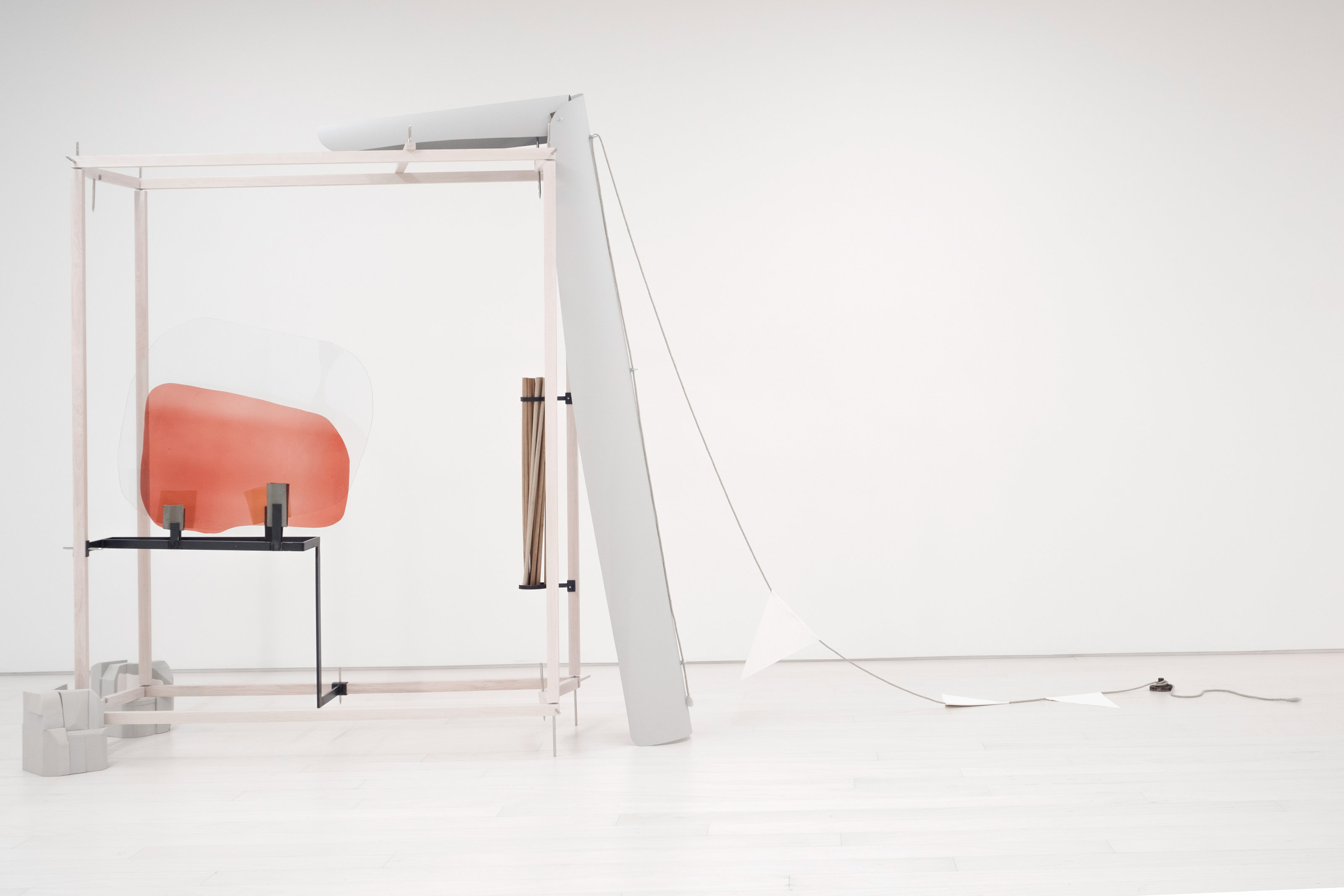 At the Benaki museum, R. H. Quaytman presents a newly commissioned work each titled  “Parthian Shot” and numbered in the series of paintings: This exhibition brings forward the tremendously rich and complex composing of image and text together that both play interdependent roles in seeing, experiencing, reading, remembering, misremembering and forgetting. Two powerful works share nearly identical subjects but are extremely different are “Return to Khodorciur–Armenian Diary” and “I Had Nowhere to Go.” The former is an extremely moving video by artist duo Yervant Gianikian and Angela Ricci Lucchi showing Gianikian’s aging father, a survivor of the 1915 massacre of Armenians in eastern Turkey, as he reads entries from his personal diary. It is exposed and raw: The result is an act of reverent documentation. Juxtaposed against this raw objective footage is the new latter commission,,which brings together two of the biggest names in Documenta 14, Douglas Gordon and Document contributor Jonas Mekas. Gordon transforms the eponymous novel by giving the viewer of the film fragments of Mekas’ fading memory.

Subsequently, we are left with another answer to how art can change the world: “We must assume responsibility and act as political subjects instead of simply leaving it to elected representatives.” After four years of research, we are presented with is a lot of scholarship into artists that are not heavily historicized. Only time will tell if these artists will be accepted into the cannon: The curators intentionally selected artists that are not represented by renowned  galleries with the exception of a few. Art, this exhibitions seems to say, is bigger than the art market and the hype revolving around it: it is an area of disjunction that enacts the right to disagree, form counter proposals, and create alternative histories that challenge our default ways of thinking.