Photo Courtesy of
The Loewe Foundation

Led by Creative Director Jonathan Anderson, the Loewe Craft Prize celebrates the important contributions of artists and artisans working in society today. An extension of the Loewe Foundation, the competition honors the humble beginnings of the Spanish house, which opened as a craft cooperative in 1846, and offers a platform for new talent to create and expand the possibilities of modern craftsmanship and conceptual methodology. Document’s Nick Vogelson traveled to Madrid on the occasion of the inaugural award ceremony and exhibition, where Charlotte Rampling delivered the top prize to German sculptor Ernst Gamperl along with honorable mentions to weaving collective Artesanías Panikua from Mexico and Japanese glassmaker Yoshiaki Koji.

Standing at over three feet tall, Gamperl’s “Tree of Life 2” is a large vase carved from the wood of a 300-year-old oak. Uprooted by a storm in Bavaria, the plant gained new life through the artist’s careful treatment of earth, clay, and stone power on its surface. “I make a first test cut,” Gamperl says of his craft, “trying smaller forms to see the behavior of the wood, how it’s warping. During the working process I always keep it underwater and fresh. I then allow the finished object to dry because the drying process influences the form.” 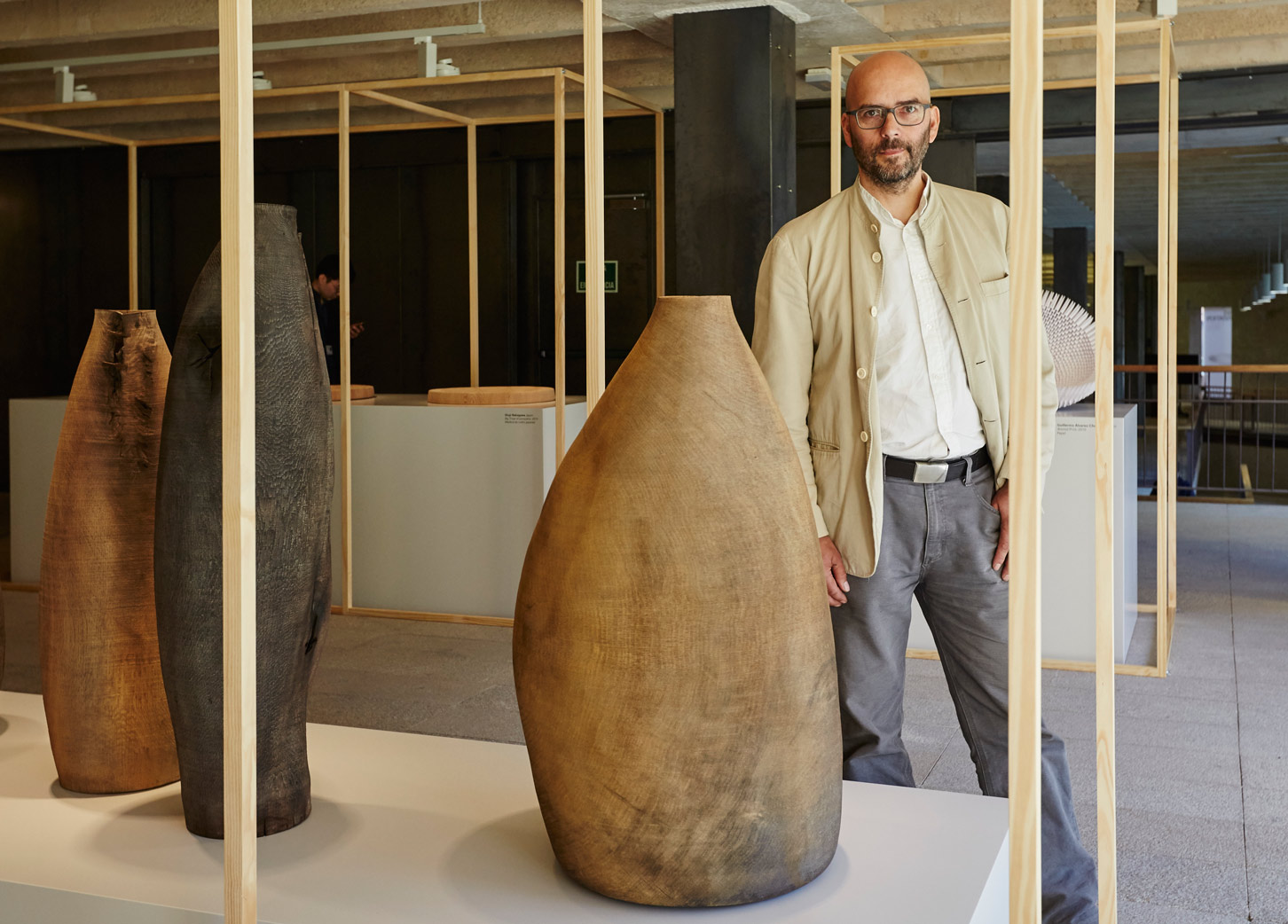 Ernst Gamperl with his prize-winning entry “Tree of Life 2,” 2016. Photo courtesy of The Loewe Foundation.

Originally trained as a carpenter, Gamperl turned his attention to sculptural design early on in his career. With no formal knowledge of art or the methods of turnery, Gamperl labored over the challenge of manipulating wood into the more lyrical silhouettes of traditional ceramics for years. Now, two decades into his practice, the artist’s extensive knowledge of wood as a medium is evinced by the remarkable curvature of his minimalist designs.

You use your hands with the idea of being human in a natural world, and there is this kind of humbleness to it. — Jonathan Anderson

Artesanías Panikua, recipient of the jury’s honorable mention, is a family of artisans from Mexico’s Michoacán region that employs traditional basket-weaving techniques to create astonishing art-objects representing mythological symbols and deities. The group’s piece, “Tata Curiata,” an homage to a sun deity, speaks to the importance of family and the expounding power of tradition passed down through generations. 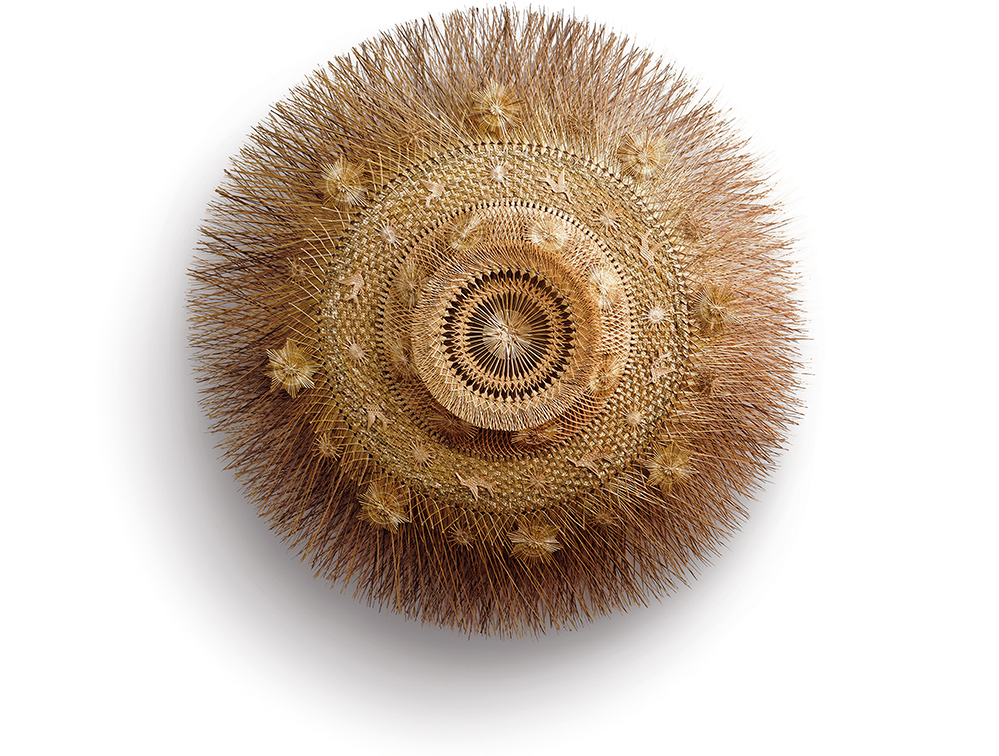 Another artist, Celia Pym, a conceptual garment maker from England, utilizes the practice of darning and restoration in her art to think about the very personal and lasting connections made through clothing. Her piece, “Norwegian Sweater,” was salvaged from a garment recycling factory where it was to be shredded and rewoven into a new textile. By mending each of its imperfections with white yarn, Pym restored the piece to a wearable state. “What I’m interested in particular is how we look after things,” the artist says. “Darning is so much about care, because when you get a small hole in your elbow or your heel, you look after that bit or someone else looks after it for you. If you keep wearing and living with the things, the holes keep growing. It’s just the nature of putting new material in. The work is this small, tender attention to care.” 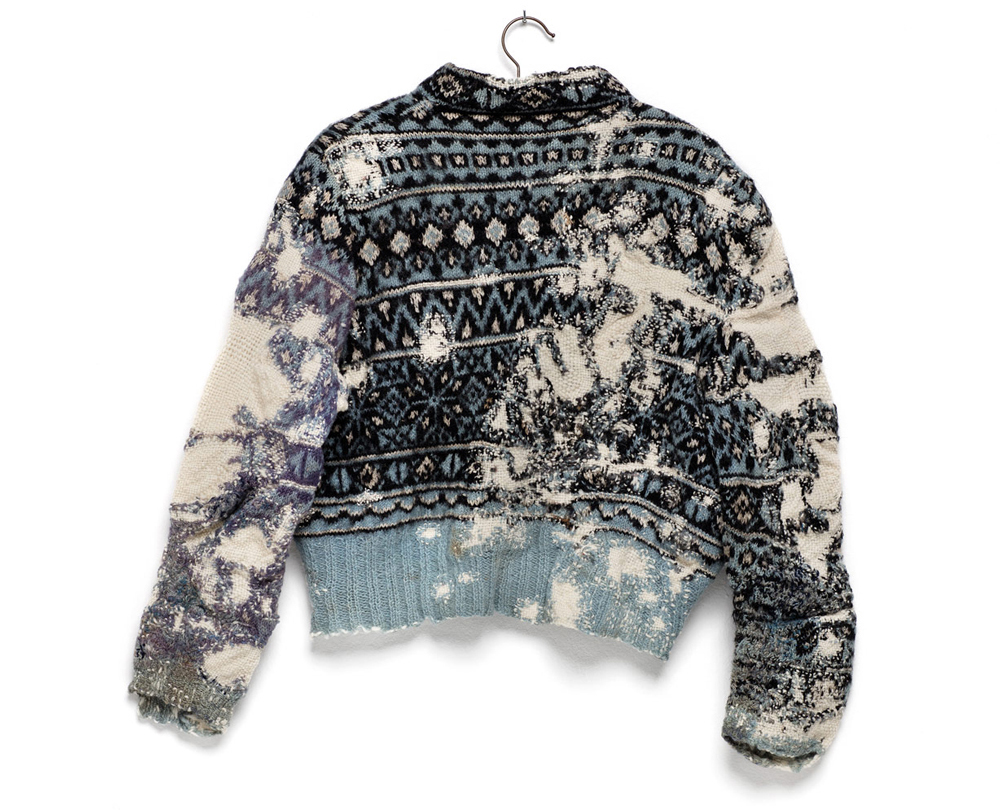 Now more than ever, art and artists are exploring the manifold possibilities of new media, digital platforms, and emerging technology. With so much of our life experience integrated into the virtual realm, the arrival of an annual craft initiative is somewhat unconventional. The goal, Anderson, who first conceived of the Craft Prize competition upon his appointment to the fashion house in 2013, hopes, is to reaffirm the invaluable importance of cultural objects—objects made by human hands, with human strength, and through labored, meticulous, and very human effort. “You use your hands with the idea of being human in a natural world, and there is this kind of humbleness to it,” he says. “In a weird way you try to re-conceptualize what nature does, or re-conceptualize what humanity does, which is part of nature. When you strip it down it’s all the same thing.”