For his debut collection, shown just this past week, 26-year-old Ludovic de Saint Sernin exhibited a curious blend of organic textiles, leatherwear, and relaxed silhouettes that can be described as oasis kink. Think grommet and lace-up flares paired with sensible clogs, a ceramic “knit” top peeking out from under a raw-edge tunic, leather totes, babouche and ballet slippers—even a linen jockstrap. The inspiration for the offering derives (in part) from the cover art for Christina Aguilera’s 2002 album “Stripped”, which features the songstress in a familiar pair of lace-up trousers. Keeping in line with this theme, the soundtrack for the presentation at the Hôtel Particulier in Paris was a mix of minimal beats by Lukas Heerich that included the occasional sound bite from fellow turn-of-the-century it-girls Lindsay Lohan, Mary-Kate and Ashley Olsen, and Britney Spears. Here, Document sits down with the designer to discuss his past at Balmain, making friends via Instagram, and on-going current obsessions.

Benjamin Gutierrez—You have a really unique background: your mother is French and your father is Portuguese. You lived along the Ivory Coast in Africa growing up, and now you work between Paris and London. How do you choose which elements of a culture or place to take with you and which to leave behind?

Ludovic de Saint Sernin—We are all products of our upbringings. It’s hard to say which bits are from where. I have been to Japan twice in the past year, and that has definitely had a big impact on my design. This summer I am planning a road trip through California as I am currently obsessed with the landscapes of the desert there. I am sure that will show in my next collection, but it might not be so literal. I am also very interested in sexuality and the codes of dress associated with it. I touched on this in this first collection, but it’s something I would like to spend more time exploring further.

Benjamin—Before launching your own label you worked on the design team at Balmain. Your sensibility is obviously quite different from Olivier Rousteing’s high-glamour, maximalist approach, but yet, there is an unmistakeable elegance, even sexiness, to your work—particularly the grommet and lace-up detailing—that calls to mind elements from your past. What else did you take away from your time at the French atelier?

Ludovic—I loved my time at Balmain, they were my first fashion family, and I am very grateful I got to work for Olivier, it really was an amazing experience. You are right, I introduced the lace up details in my first collection as a nod to it. At Balmain, I made textile and embellishments, which were artisanal pieces. I want to continue working and experimenting with surface, texture, and decoration. This season I worked with an artist based in East London on ceramic discs. It was a deliberate attempt to have something more down-to-earth and organic looking with this artisanal feel. But I wouldn’t be surprised if I did turn to do something more sparkly in the future!

I love the idea of bringing some nostalgia and including some personal history into my pieces.

Benjamin—Many designers like to draw a distinct line between the work they produce and the world they inhabit. You don’t seem to have an issue blurring the two worlds, which is really quite beautiful. Did you intend for your clothes to be so autobiographical?

Ludovic—The approach evolved naturally. After I left Balmain, I started a project on my Instagram. I was bored of posting photos of myself, so I began scouting for guys that looked a bit like me. I would ask them to pose like me in outfits that I had worn. Then, I started making pieces and shooting them. I had never done menswear before, but it felt very liberating to design for myself or for these body doubles. Some pieces in the collection are also inspired from my own wardrobe, bought or borrowed. I love the idea of bringing some nostalgia and including some personal history into my pieces.

Benjamin—Other than these “body doubles,” who else inhabits the world of Ludovic de Saint Sernin? 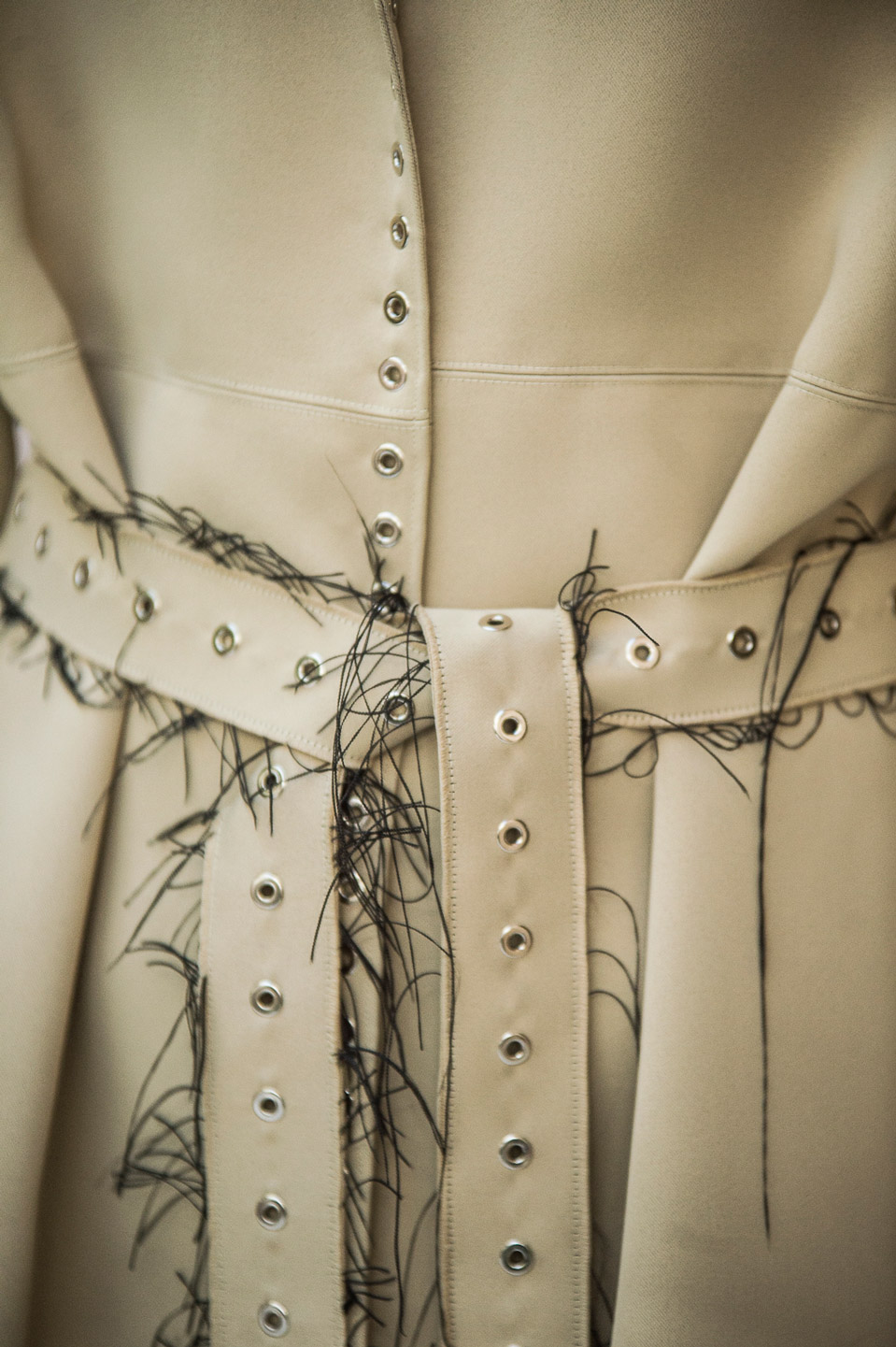 Ludovic—Even though the collection is expensive and precious, I really have an open approach to people wearing it or being a part of it. I met a guy—again, through Instagram—who became my fit model. He came to my studio every week for the last four months, and we became friends. It made me so happy to see him in [the clothes], and we talked about how it felt on him— it helped my design process. I would be happy if he asked to borrow a piece for a night out just as much as I would be for a stylist to borrow for a magazine. It’s also important to know that the collection is designed to be worn by women as well.

Benjamin—What other artists or photographers do you look to for inspiration?

Ludovic—Going to exhibitions is what I do in my spare time so that unmistakably influences me. Recently, I’ve become inspired by Isamu Noguchi. I visited both his studio/museum spaces in New York and Japan. The colors and textures of his sculptures can be seen in this collection. Robert Mapplethorpe’s photography is also important: his view on sex and sexuality was groundbreaking, and I wanted that to come through in my work.