Since 1849, Moynat has been a staple of French luxury. The house crafts high quality trunks, leather bags, and travel accessories with unparalleled precision, and maintains that its one tradition is to celebrate the untraditional in art and design. In keeping with this mission, Moynat has created an “artist trunk” inspired by Mambo, the Franco-Hungarian artist known for his mural designs and signature use of red, for Fall 2016. Mambo describes his graphic abstract interplays as manifestations of “our brain, our mental processes, sensations, emotions, memories, inner feelings and mechanical reactions.” “Humanity,” he adds, is the “core theme” and a singular inspiration.

The same sentiment holds true of the trunk created by Moynat. The goal, while always to craft timeless, durable luggage, was to produce a trunk that could be an extension of the artist himself. Mambo began his career as a street artist, traveling on foot through the streets of Paris to create and sell his work. For this reason, the new trunk contains a fold out easel that, when fully extended, displays up to six of the artist’s works. The curved bottom is outfitted to hold storage for Mambo’s paints, brushes, and other supplies. Additionally, leather pockets in the lid of the trunk hold personal and inspirational possessions. “We wanted to create a trunk that could transport art and could display it at the same time,” says Moynat Artistic Director Ramesh Nair. “What we have done is to manage to transform any location into a gallery. Art has no confines.”

The exterior of the trunk is itself a work of art, too. Moynat repurposed the canvas used by Mambo to cover the floor of his atelier in Los Angeles—a splattered, paint-dripped, and footprinted canvas—and stretched it over the trunk’s shell. The result: a trunk that celebrates, captures, and contains the creative process.

To coincide with the arrival of the artist trunk, Moynat has released a special film documenting the project, the collaboration with Mambo, and the art of luxury leather craftsmanship. View the film here, and see the trunk, along with the entire Mambo for Moynat collection, on exhibit at Le Bon Marché in Paris from August 27 to October 16, 2016.

View Slideshow
Tags
Above the FoldArtFashionMamboMoynat 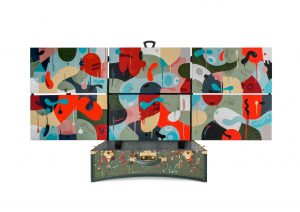 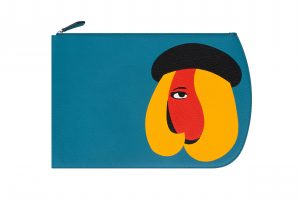