This story appears in the current issue No. 9 of Document, available online and at select newstands worldwide.

Human beings can be unpredictable, but also, completely, annoyingly predictable. Mostly, people meet expectations. Few play havoc with what’s expected of them, so life gets lived inside the parameters of established social and cultural behaviors. Maybe people don’t have the will or the time to invent each day: to reinvent their days, day by day. If you’re lucky, you’ll find a different route to work, or eat at a different restaurant. It’s not that dreary, really.

Artists are remarkable if and when they can reinvent the wheel, rolling it along charged and unfamiliar visual and intellectual routes, to supply other ways of seeing. Through the best artists’ work—their concepts, imaginations, and senses within their conjured products—people see the unfamiliar, accomplished by artists making the ordinary extraordinary. In her art, Pipilotti Rist has changed water into wine and the other way around. She re-conceives the visual world, shifting the ground, and like a human generator, energizes objects with novel sensations.

Rist negotiates with and employs various media to transmit and transform feelings into objects and objects into feelings. Her capacity to fabricate emotion through actions and gestures configures new relationships to the material world. Hers is an entirely contemporary aesthetic. In what will be a more than 40-year long project, “Innocent Collection,” especially, Rist responds to our time, in which we, in the West, particularly in the US, waste much more than we use. Poignantly titled, the work is a refashioning of the discarded—I’ll call it “refugee” material—such as plastic containers, wrappers, and what is meant to be recycled. Instead, Rist’s recycling has turned it into art, and, in doing so, Rist responds to a persistent, singular question that has forever plagued art history: What is beauty?

In one of the seven photographs here, a plastic soda bottle, held on a horizontal, captures a cloud. Rist has bottled a cloud like a sailing ship once was—a wonder, which, in earlier centuries, children gazed at with awe. Rist has adopted that concept, but with uncanny vision, renews it, making magic with the “refugee.” The discarded objects in her “Innocent Collection” do reflect on “others,” on the unwanted—human refugees, also. Who and what is wanted, and why? What is kept, and what is thrown away?

Rist shows us beauty in unexpected forms and in strange places. She calls the plastic pieces in her collection “instant diamonds.” “Diamonds in the rough,” I think. But here is beauty, Rist seems to say, look how it dances before your eyes. 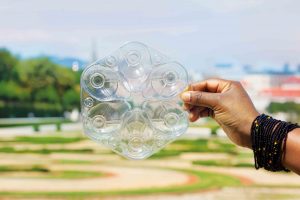 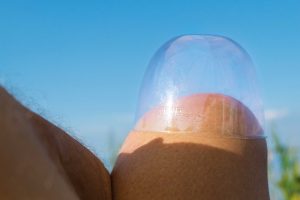 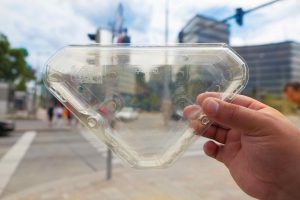 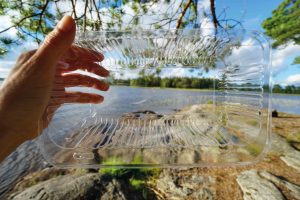 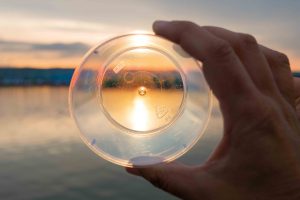 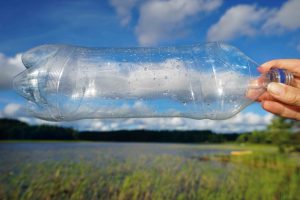 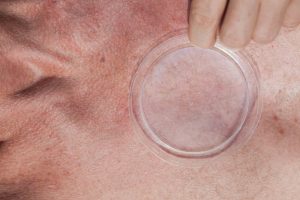