Once bulldozed by stereotypes, crossplay is cosplay’s gender revolution

Matt Baume is a self-proclaimed inventor of smart and exciting projects that make people think.

How do you turn what was once demonized into a source of pride and exploration? Matt Baume writes on cosplay's gender defying evolution

Uniformly dominated by men, geek fandom is undergoing a rapid evolution in the ways that gender can be expressed. The vanguards of this change? Not superheroes sporting unisex tights, but mortals: strapped up in gear, powdered to perfection, and uninhibited in their performance of gender.

Once a marginalized niche, crossplayers are a subset of individuals within the larger cosplay community that is now surging to mainstream prominence with its subversive interpretations of traditional male and female characters. In years past, these wearers often felt constrained by gender norms, but a wave of gender rebels has emerged to challenge societal conventions, taking advantage of the arena’s low barriers to entry and high degree of visibility in order to push the larger geek community to explore limits once thought beyond reach. Far from an amateur hobby, this rise not only reveals a shift away from outdated constraints on gender boundaries, but sits at the forefront of a larger evolution in mainstream geek culture.

Dating back to the start of the 20th century—perhaps earlier—the practice has labored under many of the same restrictive gender expectations as society at large. For example, the first time cosplayer Charles Battersby, who prefers the plural pronoun, put on a Catwoman costume, they were thrown out of a convention. It was 1993, and Battersby was so taken with Michelle Pfeiffer’s performance in “Batman Returns” that they set out to emulate the formidable antiheroine, vinyl suit and all. “At that time in my life, I was just starting to come out as trans,” they say, “and the idea of someone who disassembled and reassembled themselves in a new way spoke to me.” But when Battersby strode proudly into the 1993 Great Eastern Convention, they were swiftly ejected by representatives from DC Comics. “There was a very stern statement that I had to leave,” Battersby recalls. “They didn’t want the character depicted that way.” But although corporate forces were intent on blocking a trans woman from inhabiting the character, the larger public was eager for more. “The moment they were escorting me out of the building, a mother came up with her daughter and said, ‘Can she get a picture with you?’” Battersby says.

Twenty-five years later, geek fandoms are now clamoring for the “queering” of characters, and corporate representatives who early on spread heteronormative panic are gone. In their place are creative leaders like DC writer Greg Rucka, who recently clarified that Wonder Woman is indeed queer; writer Gail Simone, who introduced a bisexual trans character to the Batman universe in 2013; and Ryan North and Erica Henderson, whose “The Unbeatable Squirrel Girl” comic series features the trans-masculine Koi Boi. Even issues of “The Flintstones” have championed queer exceptionalism, with cavemen named Adam and Steve saving their tribe.

This is not the first time that cosplay has offered refuge to the marginalized. It emerged as a mode of expression out of early science fiction conventions in the late 30s, when the trendsetter Forrest J. Ackerman (who coined the term “sci-fi”) first sported a “futuricostume.” Geek culture, then on the far fringes of society, gradually adopted costume masquerades at events like the World Science Fiction Convention, and years later at Comic-Con in the 70s. A decade later, mainstream outlets such as the “Los Angeles Times” began reporting on cosplay events with a sense of wonder, marveling at the mix of “master craftsmen” and “novice costumers” at Worldcon in 1986. These events offered a creative outlet to geeks who were at the time derided for their nerdy interests. It’s hard to imagine now, but comics, science fiction, and fantasy were once badges of the social pariah; inhabiting the persona of a superhero or villain equipped geeks with a vocabulary—and a uniform—for personal empowerment. Beyond individual expression, cosplay events enabled distant fans to commune together before the advent of the internet.

Yet cosplay, which emerged as an art form in the gender-stodginess of the 50s, long excluded those who sought to queer their favorite characters. “I had no delusions whatsoever in the early 90s that there would be any acceptance,” says Battersby, thinking back to their Catwoman confrontation. Still, they felt at least marginally safer when in costume. “Back then there were few places that it was socially acceptable to be openly trans. Even today, you take your life in your hands walking down the street not looking right,” they say. “If people perceived [your attire] as a costume, that could be more acceptable than wearing a blouse and skirt and going to a cafe.”

“Comics, science fiction, and fantasy were once badges of the social pariah; inhabiting the persona of a superhero or villain equipped geeks with a vocabulary—and a uniform—for personal empowerment.”

“There’s the chill nerds who don’t give a rat’s ass what you do,” says Justin Saint, a cosplayer based in Vancouver. “Then there’s the, ‘Hey, men must be men,’ attitudes. I’d even get that from girls and gay guys. When I started doing drag, I wanted to do Celes Chere from ‘Final Fantasy VI,’ and I had a gay friend go, ‘But she’s a girl.’” But these limitations have begun to shift, thanks to millennial disinterest in the gender binary. According to research by G.L.A.A.D., an L.G.B.T.Q. advocacy group, 20 percent of millennials identify as queer, compared to 12 percent of those in Generation X, and 7 percent of baby boomers. Millennials are also more likely to be trans—2 percent compared to 0.5 percent of baby boomers—and a survey by Fusion showed that 50 percent of millennials consider gender to be a spectrum. This shift is reflected within geek culture in recent years by trendsetters forging a path between rigid male and female tropes. “Leadership in the community has allowed us to be more [of] who we are,” says cosplayer Jay Justice. “It starts with being raised to think there’s nothing wrong with me….so I try to impart that onto other people.”

“I remember reading an article about Tokyo where they were trying to stop men from dressing up as female characters,” says London-based Jackie Wu. It led him to a cosplayer named Ladybeard, a large, bearded Australian man who dresses in frilly, feminine outfits, most notably Chun-Li from “Street Fighter.” “He’s one of my inspirations,” Wu says. “It’s the first time I’ve ever seen someone embracing his masculinity and also dressing up as a female character.” Though he typically dresses as Lara Croft from “Tomb Raider,” Wu recently debuted a Chun-Li costume of his own.

Like the expanding lexicon of sexual identities and preferred gendered (and ungendered) pronouns used in everyday life, cosplay too has its own multifarious terminology. “Crossplay” generally refers to a person wearing a costume that is different from the wearer’s own gender; “gender-bending” or “gender-flipping” usually means that the gendering of the costume itself has been changed. (That is, a woman dressed as a male Superman would be crossplaying; a male version of a Princess Leia costume would be gender-bending.) In practical terms, that means that geek conventions are now more open than ever to costumes that reflect the artist’s own curiosity about gender. This has transformed cosplay into an art form, broadening opportunities for personal investigation and elevating the playful act of dress-up into political performance. These cultural shifts match recent political advances for the queer community; as legal equality is expanding for L.G.B.T.Q. people, so too are opportunities for self-representation. 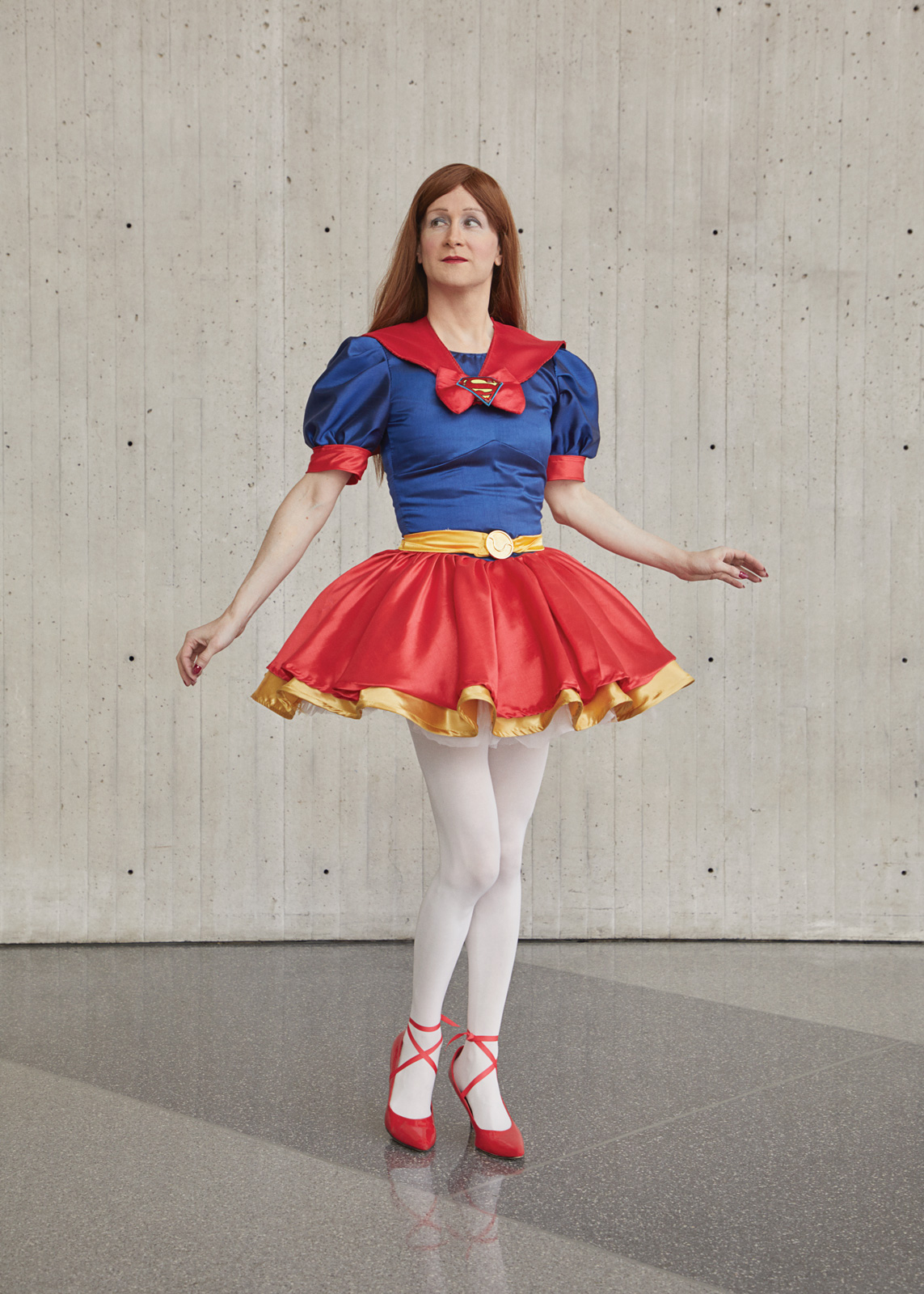 Denver-based cosplayer Kaai Santerelli set out to specifically make a statement with his work. “All of my friends were doing male versions of Captain America,” he says. “Somebody said something about how they were ‘butching up’ their version, so I went the opposite. I can be Captain America in a frilly dress.” One of his most popular costumes, Santerelli’s interpretation of the hero is a shapely patriotic dress accompanied by glittery stars, tall red heels, and a ribbon in his perfect curly blond hair.

Along with adherence to gender roles, verisimilitude has also gradually fallen out of fashion in favor of creative reinterpretation. “There was a lot of pressure in the cosplay community to be a look-alike,” Justice admits. “But if you’re a heavy-set person, or non-binary, you might not resemble any character. It’s more important to find someone you enjoy.” In the creative economy of cosplay, increasing value is placed on appropriation of corporate imagery by community creators. Accuracy is out, and individuality is in. This shift in values closely aligns with the personalization of the artistic experience, made possible through rapid online social sharing.

In the case of Justice, that means co-opting Namor, an aquatic Marvel hero, as a vessel for her own expression of sexuality. At the time that she created the costume, “I wasn’t even out,” she laughs. “I didn’t realize I was bi, but you don’t have to genderbend because you’re gay…it really is a way for you to safely explore your feelings about sexuality. It’s okay to be with a girl because you’re Namor, and Namor is into girls. You don’t have to confront your own feelings until you’re ready.” Once unthinkable at conventions, costumes like these have evolved from awkwardly avoided rarities to the highlights of gatherings. The masculine nerd stereotypes that once dominated geek fandom are fading, thanks in large part to crossplayers subverting gender tropes with an arsenal of hot glue guns and sewing machines.

“Putting on your first outfit is a way of transforming into your inner self. If you’re good at it, you’ll transform in real life. After a while, you’re not the person who’s trying to reinvent yourself. Suddenly you’re the person who inspires other people.”

This is a shift to which gaming and comic communities are paying close attention. In the decades since Ackerman donned his first costume, public perception of sci-fi and fantasy has grown from derided kitsch to mainstream staple, with the most fervent fans serving as tastemakers. That contemporary consumers are responding to crossplay with such intense interest is a waypoint for the industry, and proof that they must cater to a community of gender rebels if they are to survive.

As the expectations of cosplay have shifted, the role of cosplayers as artists has shifted as well. Rather than passively consuming professionally produced media, cosplayers actively receive the work of geek culture creators, adapt it to fit their own ideas of gender and sexuality, and proclaim ownership of that representation within the cosplay community. And with the ongoing liberation of gender from an arbitrarily constructed binary, crossplay provides some of the most visible symposia in which that shift can be examined. This position of leadership at the forefront of an art form’s evolution is entirely befitting those inspired by superheroes. “Most of us are the nerdy kids in high school who felt uncool and unattractive,” says Battersby. “And putting on your first outfit is a way of transforming into your inner self. If you’re good at it, you’ll transform in real life. After a while, you’re not the person who’s trying to reinvent yourself. Suddenly you’re the person who inspires other people.” 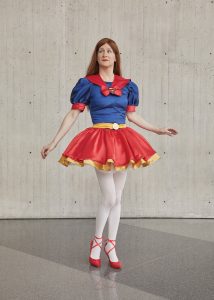 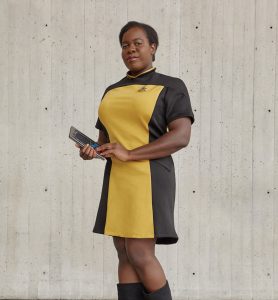