The Belgian designer fused nods to rave culture and Flemish feasts, while acknowledging the deep influences of New York in his FW18 presentation

In the mid ‘80s, New Yorkers Glenn O’Brien and Cookie Mueller penned a play called Drugs that followed an odd couple from the speed-induced ‘60s up until the opiate-infused ‘80s. Mueller, a writer and actress in several of John Waters’s early films, would go on to die from AIDS-related causes in 1989. O’Brien, meanwhile, would come to embody the downtown New York of this period, floating effortlessly between the worlds of fashion, art, music and film. Drugs would remain unearthed until the year before O’Brien would die of cancer in 2017 when it was published in a run of 500 copies by The Kingsboro Press and For The Common Good. The plaintive title, in bold black lettering, burst out against the jacket’s “prescriptive” orange or “bad cut” yellow colorways. Last night, at Raf Simon’s presentation of his fall 2018 collection in New York City, each of these covers became a working visual reference on the runway. Both of O’Brien’s covers adorned deconstructed sweaters that dangled from turtlenecks and the cover itself became a sleeveless hoodie.

For just his his third collection to be shown in the city, Simons selected a nondescript warehouse north of Hudson Yards. The set design was a moveable feast: a platform-cum-table, topped with half-filled glasses and opened bottles of French red wine, charcuterie, Belgian waffles and chocolate, bowls of lemons, piles of pomegranates, lettuce and more. It was bacchanalian excess modeled after Flemish Old Master still lifes. This buffett was meant for show goers to consume. While the rest, according to the show notes, would be donated to City Harvest, a food bank in the city. From above, lasers danced across this landscape of piles, reminiscent of the rave scene so adored by the designer.

The collection was titled Youth in Motion, a reference to one of Simons’ favorite films, Christiane F. A German film from the early ‘80s that tells the story of heroin addiction through the lens of a teenager in 1970s Berlin. A disclaimer in the post release read, “…Youth In Motion seeks to neither glorify nor condone the culture(s) of drugs; rather Simons seeks instead to consider the persistent, almost ubiquitous presence of narcotics (prescribed or otherwise) within our society and acknowledge our often conflicted relationships with them; in turn opening up a more nuanced dialog around the implications for a society where addiction and the causes of addiction remain largely taboo subjects…”

Last night’s presentation was in a category of its own, a leap in form when compared to Simons’ New York debut, which took place just one year ago against a blank canvas of Gagosian’s pristine white-walled space in Chelsea. There, blue-chip artworks by Pablo Picasso and Damien Hirst graced the walls before being purchased by moneyed collectors. The then arrival of Simons’ eponymous menswear label gave men’s fashion week a much-needed surge of energy, nudging it ever more close to its highly revered counterparts in Paris and Milan. That show was a bit of a teaser, just a few weeks shy of his first runway show with Calvin Klein, the label for which he moved to the Big Apple.

For his second collection, Simons traveled from the well-heeled streets of Chelsea to gritty Chinatown beneath the Manhattan Bridge. The odor of fresh fish on ice filled the air as the heaviness of the summer humidity weighed down on the crowd standing under the glow put off by neon signs. His models tracked down wet pavement in wide-brimmed hats like the very kind sold on the streets of Chinatown. For Simons, the presentation was, as it always seeks to be, a collision. This one of eastern and western cultures — the melting pot that forms New York.

Last night, excess and disillusionment were the qualities Simons’ sought to fuse together, above all, refracted through the lens of a city that can meld together just about any disparate qualities. The fall collected embodied the city Simons now calls home. The city can be  a bacchanal in whichever way you please. Still, the fetishization of endless nights and the drugs that make it possible, were presented in a context, consequence hovered in the ether. Youth in Motion’s narrative is arguable less optimistic than Simons New York debut, the blue-chip optimism given way to something more lived in and learned. To encapsulate this, Simons’ apropos New York reference, O’Brien and Mueller’s Drugs, stood in as a cheeky representation of the polarizing truths about the Big Apple, a place where a frenetic pace and unchecked creativity coexist. Is the glass half full or half empty in Raf Simons’s New York? The wine glasses that lined the last night’s platform led us to believe that it’s both. 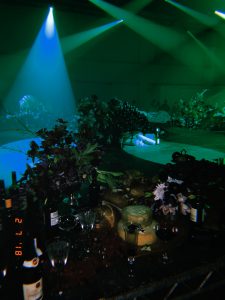 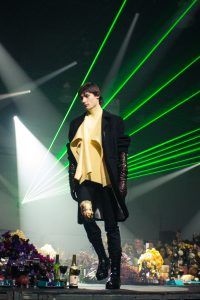 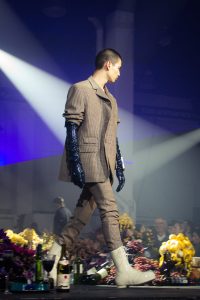 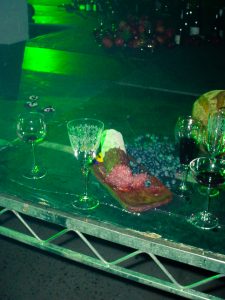 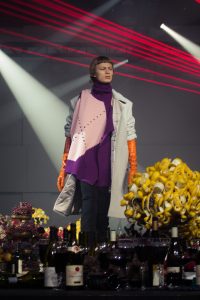 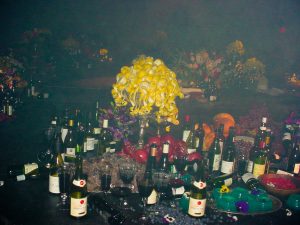 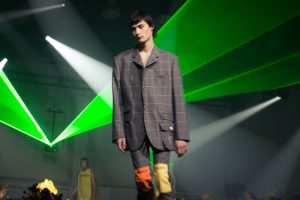 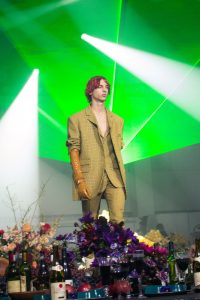