Flatbush Zombies are the hip-hop Santas of NYC

The rap trio brought holiday cheer to Canal Street with their toy-drive that saw all donations and proceeds raised for Camba, a non-profit which connects 45,000 New Yorkers to quality of life services.

Over the course of eight years, Flatbush Zombies has become one of the best known names in independent rap, known for lucid, rapid-fire lyrics, a diehard fan base, and rabidly energetic live sets–a dying breed of performance as more hip-hop artists turn to rapping over pre-recorded vocals. Erick Arc Elliott, Meechy Darko, and Zombie Juice embrace their status as mainstream rap outsiders and a mobilizing force for good.

So, on the afternoon of November 28, a line of Zombie’s fans braved the cold to wait outside the entrance of the Kid Super pop-up on Canal Street. For rest of the afternoon and into the evening, plastic Transformers, stuffed animals, action figures, and baby dolls poured in for the Zombies’ Boxes over Baghdad Toy Drive and Holiday Show. “Let’s Warm Up Someone Less Fortunate’s Holiday Season,” the flyer announced.

Everyone who brought an unwrapped gift received a ticket to the Zombies’ holiday concert on December 12, and all three members stayed for the entirety of the event to greet them, receiving the toys and speaking with the fans who stopped by–Erick in a red Santa hat.

“A few of them said they skipped school to come. I was like, ‘OK then,’” Erick remembered laughing when we spoke on the phone a few days after. “At least it’s for a good cause.”

By the end of the drive, which extended past the 6pm end time, over 200 fans had brought toys, all to be donated to Camba, a non-profit founded in Flatbush which connects 45,000 New Yorkers to quality of life services (including housing, education, and health services) every year.

“It’s a bit hard to wrap my head around,” Erick continued. “You don’t always expect people to show up, but they really did it.”

Since the toy drive, the Zombies have opened more tickets to the holiday show–all net proceeds will also be donated to Camba. Teasing an upcoming project for 2019, Erick said he has ambitions for himself and the Zombies that extend beyond their next album.

“I want to be someone people respect outside music, outside just the mic. I’d love to teach. I’d love to pass knowledge in other ways,” he said.

“I’m excited for people to see what we got.” 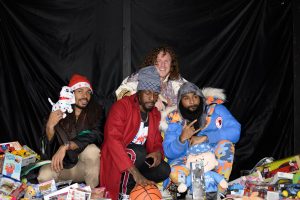