Following its pop-up at the Whitney Museum, the cult fashion label opened its first permanent New York store in Chinatown.

The new space, contrary to the brand’s pop-up shop/gallery exhibition at the Whitney Museum of American Art, was here to remind you that Eckhaus Latta is, above all, a fashion brand. Free from collaborations with fine artists and inventive display tactics, the industrial space features only white walls and rails with rubber strip curtains that barricade the dressing area, spotlighting the inventive clothes. While the train above us shook the entire building, I spoke with Mike Eckhaus and Zoe Latta on their well-considered decision to simplify.

Document—What inspired you to make a permanent space, rather than set up a temporary space as you’ve done in the past?

Zoe Latta—We’ve had two different ones in LA, and then we had the Whitney show here, and it just feels really nice for people to come and experience the clothes in real life. The only other equivalent, outward-facing thing that we do is our fashion shows and we put a lot of energy into that and then they last for 15 minutes, so it’s really nice to have a space [that’s] going to be here for a couple years at least. To build it in that way and not have it be, like, ‘Yes it’s done and we’re open but it’s totally malleable and the product is constantly going to change.’ So yeah, it’s just exciting.

Mike Eckhaus—Yeah, I feel like with this space we wanted to be more of a blank slate—something coming off of the show at the Whitney, have it be more stark, a bit sensual, pared down kind of, by playing with this other environment met with the truisms of the building and the reality that you’re under the Manhattan Bridge and feeling like you’re in Chinatown in this mall space. Having it kind of be these different textures and kind of conflicting environments layered within each other, but something in the end that feels rather comfortable. And, I don’t know, we’ve been here a lot over the past couple days and it’s like, this space is nice.

Zoe—I don’t want to work in the studio anymore.

Document—I love this space—it’s such an interesting space because I feel like it’s always evolving, but also, like, it’s just full of such gems. Like the “Philosophical Investigation Agency”—I think to myself, ‘Tell me more. Why? How? What exactly do you do there?’ Which, honestly, at the end I don’t really think it matters, it’s just another one of those things that’s in this building that’s just magical. Do you guys have any artist collaborations in this space?

Zoe—No, the flowers are and will be done by Sophie Stone, who’s an artist and a florist that we collaborate with. She provided floor pieces for [the Whitney show.] And then we have Sophie Andes Gascon—different Sophie—who used to work with us and now makes her own things and they are very beautiful. And then Sonya Cohen, who does Come Tees, who’s an old friend of ours over here. We also just did part of our collection with her from last season, so that’s also in store. These are her screen-printed pieces. And we’re gonna change it often.

Mike—It’s something where, like, coming from the Whitney, and something that was more about questioning fashion and retail and kind of the mediatization and interactions of that, we wanted this to really feel like this is a store, this is about the clothing, this isn’t meant to feel like a continuation of an art exhibit. Not saying that there can’t be art objects, because in LA our stores have artworks in it, but they need to make sense.

Zoe—They need to come naturally. We’re not a gallery, we’re not curators; the pieces that we have in LA are conversations with friends and they wanted to make something to be part of [our physical environment], and this feels like a platform where we can do that but we don’t need to do it all at once.

Document—How would you describe the space in one word?

Zoe—Yeah. The heat’s out at our studio so… [Laughs]

Mike—I don’t know one word that would describe it but I feel like a lot of going into it was about the ideas of things conflicting or grating against each other.

Zoe—We wanted it to feel industrial and warm.

Mike—Yeah, exactly. It was about having these plastered walls within this exposed, dropped ceiling of the infrastructure of this building. Feeling like you’re removed from something but also being really aware of where you actually are. 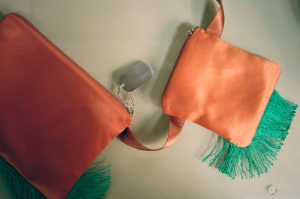